Interview originally appeared on www.musicnews360.com, finding the stories between the songs.

@DarylHance is an artist whose music is steeped in the spirit of blues, funk, and rock n roll, fortified with vintage tones, bottom-end, and transcendental messages high on life. @MusicNews360 caught up with Daryl in the process of building a back porch, and meditating on a forthcoming fourth album. We talked about lot lizards, meth heads, gardening (or lack thereof), and corn snakes. Below are excerpts from our conversation, as well as the WORLD PREMIERE of the video for ‘Inside’.

DH – Oh I don’t know…I recently had a dream in which a Seagull appeared.

DH – Teleportation , that would be cool. Load up my gear, and teleport to the gig.

DH – Ahhh…More pine forest. The Okefenokee Swamp is about a half hour north of where I live. Though, the whole area is swampy. Pretty much all around me there is water. 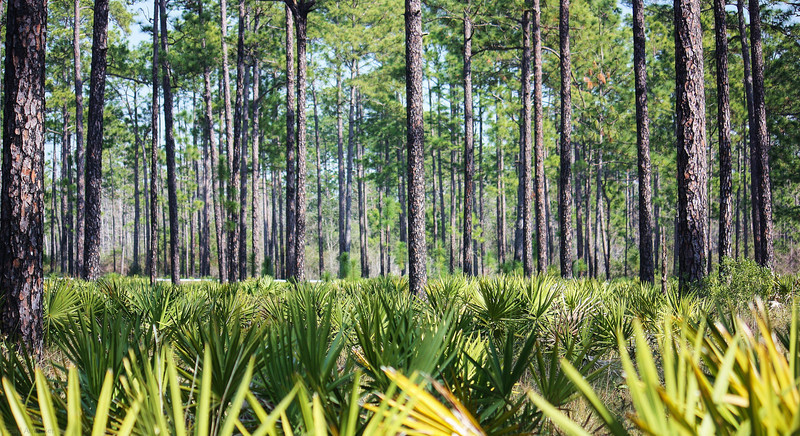 “Pretty much all around me there is water”

Lots of wildlife. Deer, turkey, wild boar. There some wild boar out there. They’re around.

A lot of snakes in my yard, too.

MN360° – Does living out among nature influence your music?

DH – It has an effect…definitely, it has an effect. I have a yard full of animals. I don’t have a well groomed lawn–I just let everything grow. I don’t use any pesticide or spray or any of that shit. I let my lawn grow and grow, so all the animals flock to my yard.

“I let my lawn grow and grow, so all the animals flock to my yard”

I found a 5 foot snake in the yard this year.

Corn snakes, garden snakes…haven’t seen any rattlesnakes recently. Well…actually, I found one pygmy rattler about 4 or 5 inches long. Lizards. Every once in a while you will hear an owl. Hawks all the time. Buzzards. Ground dwelling critters…Moles. Rabbits. Foxes, around there.

I try to keep them outside. Every once in a while, one of the animals makes it inside. I went out the screen door one time, and a snake fell on my head. I felt something slide down my neck…it was a corn snake. I had a frog explosion at my house too, right after the first hurricane this year. Lot of frogs. When you get frogs, here come the snakes. But yeah…all that gets into the music, somewhere or another.

“Every once in a while, one of the animals makes it inside”

MN360° – What sparked your interest in music?

DH – When I was eleven or twelve years old, I had a friend that had a drum set. I would go over to his house, and he used to play the drums. One day I sat behind the set and kicked a beat. Something snapped. From that moment, I wanted to have a drum set and get into drums.

My first infatuation was with the beat and the groove. I used to do a lot of air drumming.

So I did that for a little bit. Then when I was 17, I got a guitar, and started playing with friends. We had a band right after high school. Went from there… There was a bass around, so started playing bass too. I picked up singing in my mid to late 20s.

I would say early on that I knew I wanted to do music. Of course, back then when I was 14, it was more like, “I want to be a rockstar”, because that was the only point of reference. Then over the years, you start peeling back the layers and discovering more and more things….It’s a process, I guess.

MN360° – Who is your least obvious musical influence?

DH – I would say Miles Davis. I gravitate towards music with space–atmospheric music, you know, on top, though underneath the rhythm part is a big thing too. I’m not total ambient, but somewhere in between. That makes the music sound alive, when you add some space to it. “That makes the music sound alive, when you add some space to it”

MN360° – We hear that on your latest record, Wild Blue Iris. How did you create that space?

DH – I am beginning to get a better handle on the recording process, and a lot of that comes through on Wild Blue Iris. Also, we mixed the album through a Neve. That’s why it sounds more vibey and cohesive.

MN360° – Where did you record Wild Blue Iris? What was the process?

DH – I recorded the album at JJ’s house, at his studio. I tracked most all of the instruments. Reed Turchi played slide guitar on a couple of tracks. Cameron Weeks played drums on about half the tracks. I played drums on the other half, and some songs have two drum tracks.

I usually start with a rhythm ace drum machine or a metronome, and then cut three takes of the backing track. Pick which rhythm track feels the best. From there, I add lead guitar and vocals.

MN360° – What percentage of your songs would you say are autobiographical?

DH – I’d say all of them are, to a certain degree. Or, at least, all of them that have been on the records, thus far. I am getting out into some other areas, more into social commentary. I’ve had social commentary kind of songs for years, but haven’t put them out there…It’s kind of like, you meet someone new and he starts making social commentary right off the bat–it could throw you off.

A lot of the music just comes out of thin air…Sure, I’m guiding it, though it is coming to me from somewhere. I don’t sit down and write a song. Most of the songs come over the course of months and years. For instance, I have a song I started writing back in 2000 and just finished. 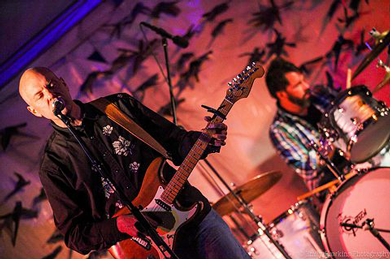 “A lot of music just comes out of thin air…Sure, I’m guiding it, though it is coming to me from somewhere”

DH – Everything is interconnected, that’s what the song is saying…that tree, the squirrel, the chair you’re sitting in, the air you’re breathing, you, your friends, Mt. Rushmore…It’s all interconnected. It’s all God, and everything else is illusion.

“That tree, the squirrel, the chair you’re sitting in, the air you’re breathing, you, you friends, Mt. Rushmore…It’s all interconnected. It’s all God, and everything else is illusion”

To me, I was trying to pour all the positive thoughts I could muster into that kind of premise. Even from the music…I remember coming up with the guitar riff. That’s actually one of the hardest guitar parts I have recorded–just picking two notes in succession for that long. That two string picking thing is hard–it gives me a newfound respect for The Edge.

MN360° – What do you see as the connection between the blues and spirituality?

DH – Well, the blues comes from real life experiences. It’s about spilling your guts, and not trying to produce hits, necessarily. Lots of modern music has lost what makes the blues great: its realness. Steering music towards money can throw the ship into the rocks, so to speak.

I’ve been fortunate enough, or unfortunate enough, to have not been hugely successful. Having just a little taste of success can really shift your focus. That shit can change you real quick.

MN360° – What is the strangest thing you’ve experienced on tour?

DH – While on tour with @JJGREYandMOFRO there would be chicks going around to each dude in the band asking us to come back to their place…She would be with her man, and he is kind of off to the side. She would be practically all over you. You’re kind of caught off guard, and the dude is looking at you all excited. It’s like, I don’t think I want to go anywhere with these people, I don’t want to end up being fitted with a ball-gag or something. That’s happened a couple of times… Not the being fitted with a ball-gag part, but the part about being awkwardly propositioned after a show. It can get weird sometimes…

MN360° – How about strangest place you’ve crashed while on tour?

DH – Well, we often sleep in the van at truck stops. There is a truck stop around Kennewick, WA…somewhere around there. You just get this weird vibe when you go there. There is always some kind of shady shit going on. You can tell there is something shady going on but you don’t know exactly what it is….people acting weird.

For instance, you are standing in line to get a shower, and one of those trucker guys comes along and starts chatting you up and says to you, “Gettin’ a shower, huh?”

“One of those trucker guys comes along and starts chatting you up and says to you ‘ Gettin’ a shower, huh? ’ ”

Another night, we were actually looking for a hotel, around Kent, OH. I go into this EconoLodge. There is some dude just kind of pacing around, in the lobby. There were two chicks behind the counter. Then another girl walks out from the back, and she has these sores all over her chest and upper neck. The chick at the register…I was asking her about a room, and it took forever for her to compute. She ended up asking me, ‘May I see your debit card’, while having the money drawer open, counting the money over and over. She kept screwing up and having to start over again. I ended up saying, ‘I left my wallet out in the van’, and went across the street to the other hotel.

There had to be some kind of meth situation going on there. Funny thing was, when we went across the street to the Super 8 and asked the girl behind the desk there, she was like, ‘Yeah, the cops are always going over to the EconoLodge.’

MN360° – What are the essential items that you carry while on tour?

DH – I bring a coffee maker. You know, one of those Keurig things. At the end of a tour, a Starbucks bill can add up…One time on a three week tour, we spent almost $150 at Starbucks. That adds up.

Also, might get a stun gun, or something. We don’t run into too many problems, though. We just stay moving.

“We don’t run into too many problems, though. We just stay moving”

MN360° – If you had to describe your music as a color, what color would it be?

MN360° – If you could have a billboard with anything on it, what would it say?

DH – It would be plexiglass, so you could see right through it… 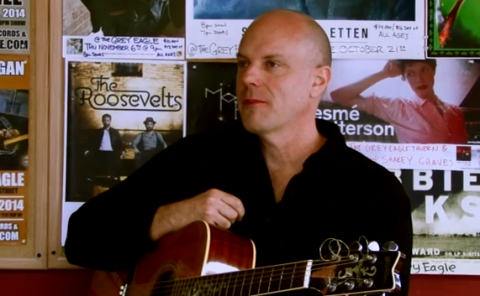